Brandy and Paolo’s story reads a bit like a fairytale.  An Ohio girl moves to New York City where she meets and falls in love with the handsome Italian Photographer.  Only their romance is as real as the daily challenges that come with running their own businesses. 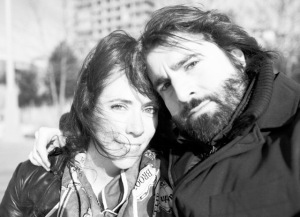 Paolo is a Photographer and the Artist behind Paolo Ferraris Colors. After 10 years as an Executive Producer/Writer in New York City, Brandy started her own Consultancy business Shearer Strategy. It’s in the last seven months, that their story gets really interesting. Selling everything they owned, Paolo and Brandy left New York to set up a home base in Columbus, Ohio and Torino Italy.
Why, one might ask?

“Working for ourselves allows us to work anywhere in the world. It’s unconventional, but for us, there is great balance between working hard and having the freedom to travel. Travel is our mutual passion and an incredible muse for Paolo’s Art.” 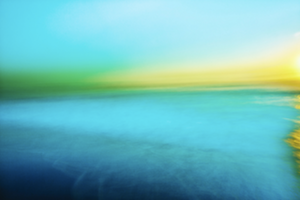 We caught up with Paolo and Brandy here in Columbus, after they spent three months traveling Italy, Switzerland, France, Spain and Portugal. “Our lives are a whirlwind experience and we have a lot of fun sharing our story.”

Columbus as a homebase: “Two main reasons. The first, I was raised in Ohio and my Parents still call Columbus home. Rolling into our 40’s we realized we had missed nearly half our lives with our families. It was time for us to be around more. The second reason, New York is crazy expensive. Rent for a small one bedroom was $3,300 a month. When you consider our lifestyle, traveling 50% of the year or more, that’s a lot of money to spend on a bed you’re not sleeping in. Plus, Ohio health insurance is $500 cheaper a month and car insurance is among the lowest in the Nation. We plan to travel even more in the upcoming years, so it no longer made sense to call New York home. Living in Columbus became a natural choice. We’re literally saving thousands of dollars a month on rent and insurance alone. Don’t even get me started on the price of a Margarita!”
How We Met and Married: “Believe it or not, Match.com. Four emails later we met at Rue B in the East Village. Paolo teases my first words to him were, ‘I’ll have a Stella.’ I was so nervous, he was so handsome, I thought he was out of my league! But Paolo comes from a family of strong, hard working women. He liked that I could and did stand on my own two feet and that being with him was my choice, not a need. That first night he was a gentleman, walking me to the subway and asking to see me again. From that day forward, he never left me guessing, ‘what does he think, does he like me? Will he call?’ He always, every day, let me know he was thinking of me and when I would see him again.
What Sealed the Deal? “Two things. One was our first trip together. A short one just to see, could we travel together? The answer was a definitive yes. We have the same travel style. We pack light, explore hard, and relax at the end of the night with a bottle of wine and a view.
Second, we met each other’s families. When Paolo asked me to meet his family, I took it seriously and bought ladylike Diane Von Furstenberg floral skirt and blouse. His Mother had prepared dinner in Paolo’s apartment and his Dad readied the wine, lots of wine. We all needed it. Paolo’s parents only speak Italian and I spoke none at the time. The wine did the trick and I passed the parents test. Apparently when I left, Bello’s Dad grabbed his arms and said, “you better not let that one go!
A few months later, Paolo came to Ohio to meet my parents. When I saw Paolo not just getting along with, but genuinely enjoying talking to my Mom, my Dad, and my Sister, I was relieved in a way I had not expected. He liked my family for who they were. A hard working, warm family who wanted nothing more than for me to be happy. I think we both knew then, we were ready for more than just dating.
Over the years, my family have all told me, they see good changes in me as a person with Paolo. I am happier, softer, less worried, and I laugh more often. Love can do that.
Our engagement and wedding stories are classically us. Paolo proposed at home, just the two of us before taking me to dinner at Marea. That night Tom Hanks was hosting a party at the restaurant. So newly engaged we were aglow walking past Tom Hanks, Eric Idle, Kevin Kline and Alan Alda… it was surreal.” Read about their low-key wedding here. 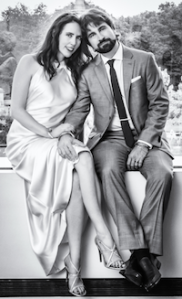 Brandy How Did You Get Into Production? “That’s thankfully a shorter answer! Journalism and Communications was my Major at OSU after learning in High School I loved production. I was fortunate and joined the WGCH News team at Grove City High School in its first year. Ms. Hughes helped set me on my path in life and I will forever be grateful. My Senior year at OSU, I worked 2 jobs in addition to going to school full time, lord knows how I did that! One was at Horizons [Companies] where I began my career in Production. The rest is career history.”
Paolo How Did You Get Into Photography? “My Dad was an amateur photographer. There were always cameras and lenses in the house when I was little. They were the first real toys I can remember. My family also traveled a lot. Travel and Photography always felt a perfect pairing for me. Since a very young age Photography has always been a fascination, a magnet that in later years naturally developed into a real job.” 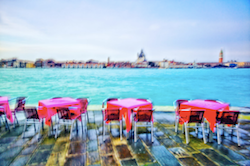 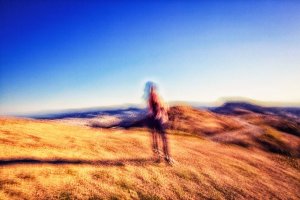 So You Travel a Lot, Any Tips on Packing? “The more you travel, the less you want to carry. Buy toiletries after you land. Paying $50 for checked bags kills any cost savings you get by packing them. For long trips we wash as we go instead of planning an outfit for each day. For the last 90 days on the road, all our clothes fit in one carry-on roller each. Thin layers of quality clothing that pack well are key. Black, blue, and white Helmut Lang T-Shirts and a few great thin scarves and I’m good to go. I’ve started looking at clothing differently these days. Will that pack well?”

Where Do You Want to Travel? “Bello and I hope to see the world. 2014 was the first year I worked for myself and it allowed us to get a taste of what we could see our lives being. In that year alone we spent our anniversary in Cartagena Colombia and visited Burma and Cambodia. We traveled throughout Europe from Italy (Venice, Torino, sipped Barolo in Barolo) to France (Paris and Brianćon). To Belgium (Bruges, Ghent and Brussels) and Amsterdam in the Netherlands. Our passports got a workout! Domestically that year we were in New York, New Jersey, Ohio, Michigan, California (LA, Palm Springs, Sequoia National Park, Joshua Tree, and Death Valley), Oregon (Portland, Cannon Beach, and Astoria – hello Goonies!) and Florida (Miami and St. Petersburg).

Problem is, once you travel like that–it becomes addictive and you can’t see working a standard 9-5 job ever again. So working for ourselves is crucial. In 2015 we slowed down a bit so that we could save, save, save and make the big changes we did to get to today. Now in 2016 we’re spending half the year in the US and half the year in Europe!”

Tell Us About a Day in the life: “Our days are pretty structured no matter where in the world we are. We have two modes. Work (Torino and Ohio) and Travel (Anywhere else in the world.)”
Work: “Wake up, have a quick breakfast getting to our computers by 9am. I typically go for a workout at 11am, shower, and have a quick lunch. Paolo only breaks 20 minutes to eat the exact same lunch everyday. Then we’re both back at it till 7PM. Paolo goes for a run while I make dinner. We end each day together over a good meal, conversation, and a bottle of red wine.”
Travel:  “When you work for yourself, you work everyday. Even while traveling and even on the weekends. Typically though in Travel mode, we “work” less because we’re in discovery mode. We’re experiencing, thinking, talking and Paolo is doing the part of his job he loves best, capturing images.
We’ll wake at 8am, have breakfast that’s a bit more leisure (we’re talking sitting long enough for two cups of coffee here!) We take turns getting cleaned up for the day while the other checks email, does social posts, or makes calls. Then we explore and capture till lunch where we check in again. Then we’re off again to explore for a few more hours before dinner. Back at the hotel, same thing. We take turns getting cleaned up while the other checks-in, social media, calls, and emails.
What Is Your Time in Columbus Like? “When we’re in Columbus, same as in Torino we work our butts off and spend time with my family at dinner. We do take one night of the week alone to explore the city, try new restaurants and see friends.
Currently, our plan is to focus on the Upper Arlington Arts Festival and then head to Portland for a few months. We’ll return to Columbus for Thanksgiving then heading back to Italy in December for the Holiday.
We’ll see though, we’ve set ourselves up to be flexible making a lot of sacrifices in 2016. We’ve had nothing but supportive cheers from our friends and family in Columbus as we navigate a less conventional lifestyle. I think the fact that we’re willing to sacrifice to create a life that works for us, one that allows us to focus on our art and passions, is the reason why. We all need to feel it’s possible to dream big and if sharing our story keeps someone else’s dream alive, then it’s a story worth telling.”
If you are interested in meeting Paolo and Brandy, Paolo will be in the emerging Artists tent at the Upper Arlington Arts Festival Sept, 5th.
Check out Paolo’s work on Etsy or PaoloFerrarisColors.com. Plus, Brandy keeps a blog to stay in touch with family and friends titled appropriately TheArtofLivingOntheRoad.com.